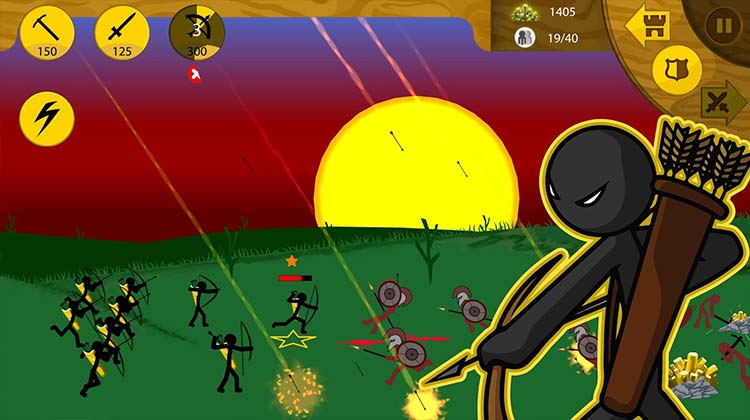 Stick war: Legacy - head a country full of stickman. Create an army and attack neighbors to conquer the world. In this game for Android your country is surrounded by aggressive neighbors. Each of the neighboring countries is developing its army and military tech. To survive be the fist one to attack neighbors, conquer them, and get their technology. Guide a powerful army consisting of swordsmen, spearmen, archers, etc. Min gold and other resources to develop your army. Learn new tech.

One of the most popular and highest rated web games of all time now comes to mobile! Play the game Stick War, one of the biggest, most fun, challenging and addicting stick figure games. Control your army in formations or play each unit, you have total control of every stickman. Build units, mine gold, learn the way of the Sword, Spear, Archer, Mage, and even Giant. Destroy the enemy statue, and capture all Territories.

In a world called Inamorta, you’re surrounded by discriminate nations devoted to their individual nations technology and struggle for dominance. Each nation has developed its own unique way to defend and attack. Proud of their unique craft they have become obsessed to the point of worship, turning weapons to religion. Each believe that their way of life is the only way, and are dedicated to teaching their polices to all other nations through what there leaders claim as divine intervention, or as you will know it... war.

The others are known as: "Archidons" the way of the archer, "Swordwrath" the way of the sword, "Magikill" the way of the mage, and "Speartons" the way of the Spear. You are the leader of the nation called "Order", your way is of peace and knowledge, your people do not worship their weapons as gods. This makes you a mark for infiltration by the surrounding nations. Your only chance to defend is to attack first, and obtain the technology’s from each nation along the way.