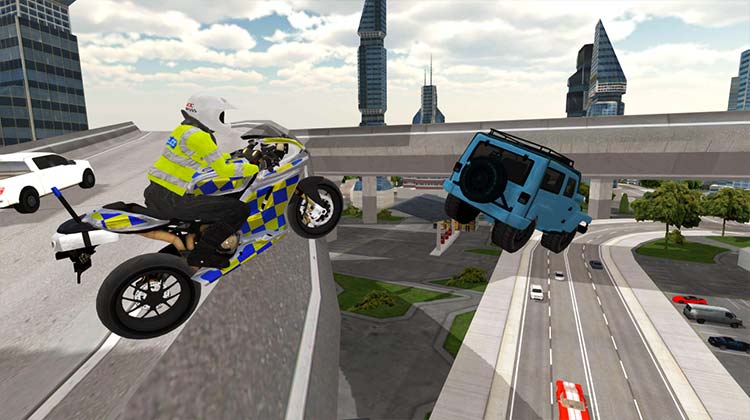 Motorbike Racing Simulator 3D is a fun and exciting open world Motorbike driving simulator where you control a super fast police motorbike. Become a talented police officer motorbike driver in Motorbike Racing Simulator 3D where you can go really fast with the help of nitro so the bike can accelerate to extreme speeds and zoom through the city streets and perform amazing stunts on hug stunt ramps.

Take to the city streets on a real police motorbike in the latest bike driving simulator game. You are the latest recruit in the academy and it’s your first time on the roads with your standard issue city traffic police motorbike. Experience real motorbike driving like never before, with realistic physics, you get to drive motorbike the way their meant to be. Do all sorts of amazing tricks, stunts, and bike movements throughout the huge open city.

Become the best police bike rider in the city and uphold the law as you turn on your siren and wave down traffic drivers breaking the law. Real authentic police bikes and siren sounds used to get the real deal in this amazing new simulator driving game.

So rev your engines, put on your motorcycle helmet, put the sirens on blast, and blaze through the city streets as the newest police officer in town in the all new and exciting motorbike game, Police Motorbike Simulator 3D! Available now for free download!