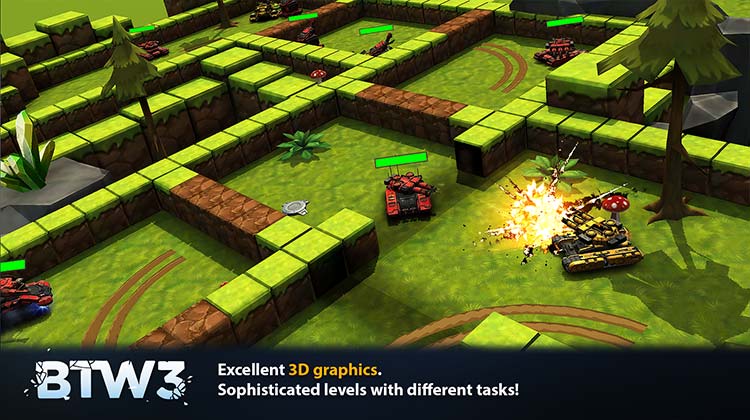 Block tank wars 3 - take a futuristic tank across the battle field. Hide behind obstacles to dodge enemy fire, shoot accurately and destroy enemy tanks. Take part in the tank war of future on the battle fields of this Android game. Take your tank out of the hangar and fight in the deserts, in the snowy plains, in the jungles and in other locations. Destroy obstacles on the way to perform maneuvers unexpected for the opponents. Apply rocket launchers, laser guns and other powerful weapons your combat machine is equipped with.

Looking for a cool online game with tanks? Time to play Block Tank Wars 3 - the continuation of the exciting pixel arcade about tanks with a lot of weapons and locations. The world of large-scale tank battles is waiting for you. Improve your skills, customize your tank for yourself: change camouflage, choose weapons from missile systems to lasers and railguns. Create a vehicle for your style, complete all levels and missions in the 3D labyrinth. Tear down the walls, shoot, strike, along with collecting bonuses and keys. Play the great tank shooter Block Tank Wars 3 for free, let everyone see who is in charge here!