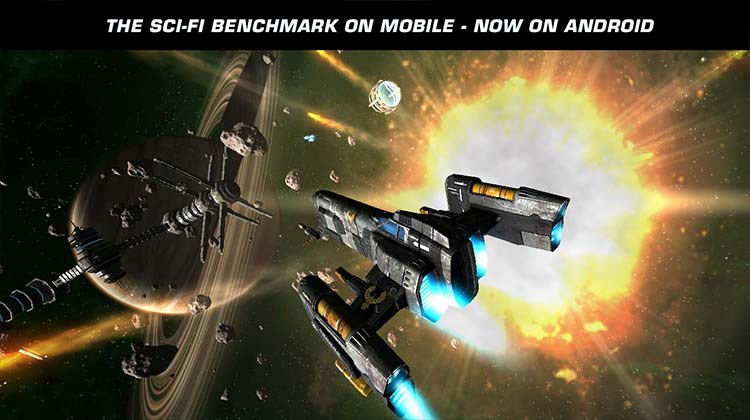 Galaxy on Fire 2 for Android

Galaxy on Fire 2 - open a galaxy consisting of more than 20 solar systems and 100 space stations in the three-dimensional image. Having catapulted in destroyed by the war future, a well-known space traveler Keith Ti Maxwell learns that the galaxy is assigned to powerful aliens. Having learned the truth about this dangerous race, he declares them war. Make intergalactic travel together with Keith – you are waited for by new opening, wars with pirates, space battles, meetings with aliens and romantic love! You can get also customize more than 30 types of spaceships, which will help with fascinating missions, including a protected escort at attacks of pirates, search of intergalactic criminals, rescue of important heroes, transportation of valuable freights, command of mercenaries for performance of complex tactical challenges and restoration of technologies of aliens from the remote regions of a galaxy.

Galaxy on Fire 2 HD is the fully optimized Google Play version of Fishlabs’ multi-award-winning space combat and trading simulation. With cutting-edge 3D graphics, an unprecedented depth of gameplay and 10+MM installs over all kinds of mobile platforms, the title is rightfully considered a benchmark of sci-fi gaming on smartphones and tablets by fans and media alike!

A CONTINUOUS STREAM OF NEW ADVENTURES

In the game, you take over the role of the hot-headed space war veteran Keith T. Maxwell and save the galaxy from its impeding destruction by the hands of devious alien raiders, ruthless space pirates and power-crazy madmen! Besides the 10+ hours campaign of the main game, you can also take on two additional adventures by unlocking the extensive story add-ons Valkyrie™ and Supernova™. Granting exclusive access to tons of new missions and content, they are available via in-app purchase and can be enjoyed right away, no matter how far you’ve progressed in the main storyline!

In addition, you can also buy various credit packs and purchase your own space station, the infamous Kaamo Club, in order to stock valuable goods and park or even pimp your favourite space ships.