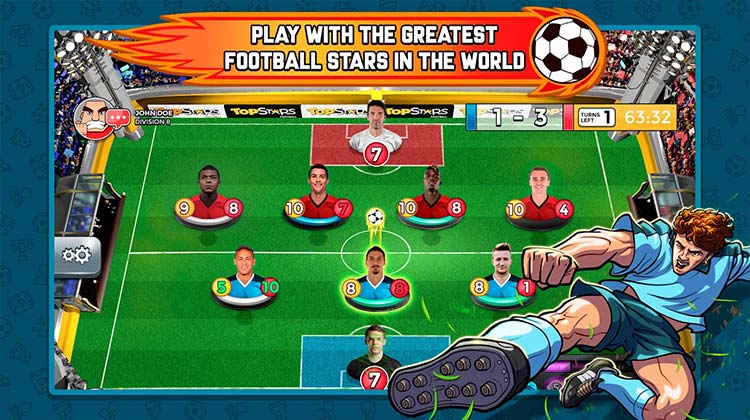 Top Stars Football League - train your own football team. Develop a winning strategy which will let you win championships of different levels. Create a team of your dream in this Android game. Buy famous football players which will power-up your team and take it to the top lines of the world high score. Train football players and increase their characteristics. Change the starting line-up and make the most efficient combination of the players. Win matches and enter the top division. Open boxes and prizes.

Join the Champions League of free football games and play with the best football players in Top Stars!

Be a smart coach and an even better football manager! Make smart plays with some of the best football players in the league to score goals and crush your opponents in live soccer games. Build your deck with the greatest footballers and improve their levels and their football skill level. Make them stronger after every live football match you play. Give them the push they need with different skill cards.

GOOOOAAALLLLL!!! Top Stars brings the excitement of football straight to your device!

From The Bench brought you other amazing sports games such as NBA General Manager 2018 and Fantasy Manager Football 2018.

Ronaldo vs Messi? Find out by building the ultimate deck of the best footballers, set your lineup, and score the most goals in this one-on-one strategy game. Place players with strong attack and defense points to take down your opponents and score on their keeper. Use skill cards to give your team the competitive edge and help defeat your opponents.

Start at the lowest division and work your way up the charts. The more matches you play, the stronger you and your opponents become. Challenge yourself with some of the best players in the Premier League. Make your way to the highest division possible.

Rooney, Messi, Ronaldo. Play with some of the greats in the Champions League. Win matches and earn incredible rewards! Open boxes or earn more cash to purchase more players. Boost your players’ levels and make them stronger by collecting more after each win.

Install Top Stars and be the best football team in the world!