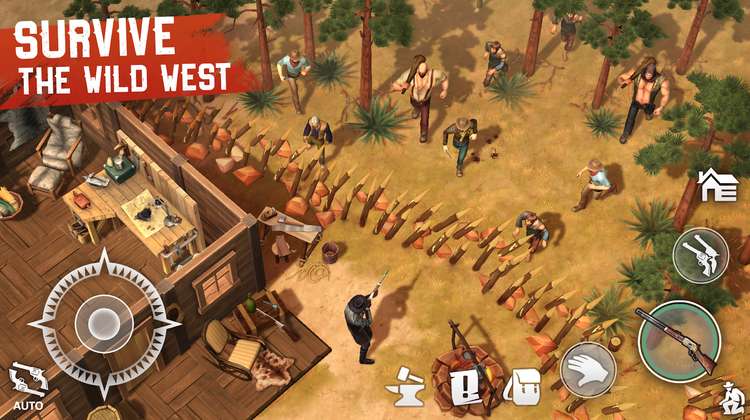 Westland Survival is a western style multiplayer RPG with elements of Wild West survival. The player will become a real cowboy traveling across vast locations. During the game, the user will hunt wild animals, build his own ranch, look for valuable treasures and resources, and interact with other inhabitants of these lands. To earn money, the gamer has the opportunity to try himself as a bounty hunter or a dealer in various items. Excellent graphics and indescribable atmosphere complement the excellent gameplay and make the project one of the most notable in the genre.

The user is offered to create his own character by selecting his gender, race and facial features. You can skip this stage by choosing a random character. After that, the exploration of the open world immediately begins, where you have to engage in a fight with wild animals, fight off bandits and look for allies to simplify the process of survival. During your usual hikes in the Wild West, you will have to look for secret places where especially valuable prizes are located.

The main goal of the Westland Survival is to build your own ranch and start a comfortable life in safety. There are a lot of different items around that you can collect, look for caches, and the collected resources or money allows you to do everything from construction to leveling your character. Take an active part in shootouts with criminals. You can use absolutely any weapon from the available arsenal to continue the fight and survive surrounded by the cruel realities of this world. Initially, you will receive a revolver with a limited number of cartridges, the rest of the uniforms and equipment must be collected and earned.

In addition to skirmishes, you need to think about collecting resources. It is necessary to learn how to conduct geological exploration in the mountains, to extract wood for processing, or to hunt wild animals. You have the opportunity to use all the possibilities of crafting to create unique weapons, uniforms and equipment. During the game, you can get exclusive weapons and items, as well as catch and equip horses from the desert. Horses in the Wild West are important because without them it is difficult to survive in the prairie atmosphere.

You get access to a huge number of original quests, of which there are more than a hundred in the game. For completing any task, you will receive a reward in the form of financial rewards, equipment or weapons. A true Wild West adventure awaits you, exploring original locations with daily cowboy fights.

When discussing the advantages and disadvantages of Westland Survival, one should start from similar projects, even if they are different in style, since they have the same goal. It’s worth starting with the positive aspects of the game:

Westland Survival also has its drawbacks, so it’s important to list them:

In conclusion, it can be noted that Westland Survival is an interesting survival game made in an unusual setting for this genre. All fans of such applications should definitely pay attention to it and spend at least a few hours in the world of the Wild West. 🤠