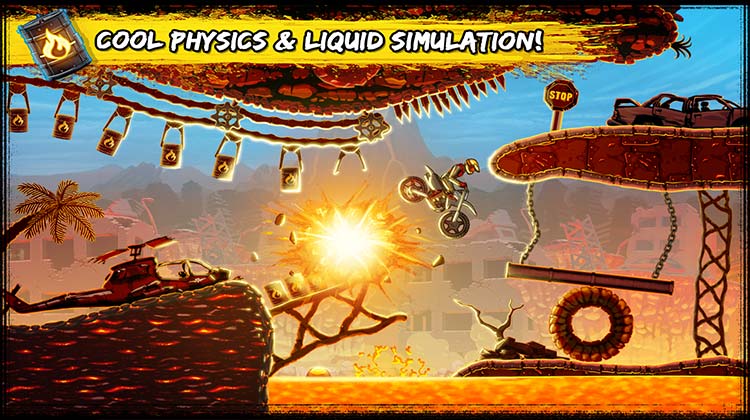 Bike Rivals is a new and exciting physics based motocross game from Miniclip. Turn the key, kick the starter, pull the throttle and push the envelope on the bike ride of your life. Be the most intense, competitive and quickest rider in order to get the 3 stars on all the levels, while enjoying the amazing bike physics and fast-paced gameplay. But this isn’t just about finishing each level...it’s about getting the fastest time! Try your best to beat the clock and see how you compare against your friends.

With simple controls, tap on the edges of the screen to accelerate and brake, while tilting the device to lean backwards or forward, giving you an edge in key sections of the levels. Take on the death defying worlds of Trial Zone and Apocalypse, with their numerous dynamic elements that make this game very challenging. Perform tricks like wheelies, backflips and frontflips to get some nitro boosts, or pick them up throughout the levels. Use them wisely, and you’ll get even better race times!

Bike rivals - participate in dynamic and deadly competitions on powerful motorcycles. Help your brave hero beat the most difficult tracks. Control a crazy biker in this Android Racing game. Try to escape the dangerous traps and avoid death, rushing on the heels of every participant. Avoid rockfalls and rolling stones. Jump over lava flows and water obstacles. Fly up into the air with the help of amazing springboards. Do various tricks like flips, riding on the rear wheel, and so on.