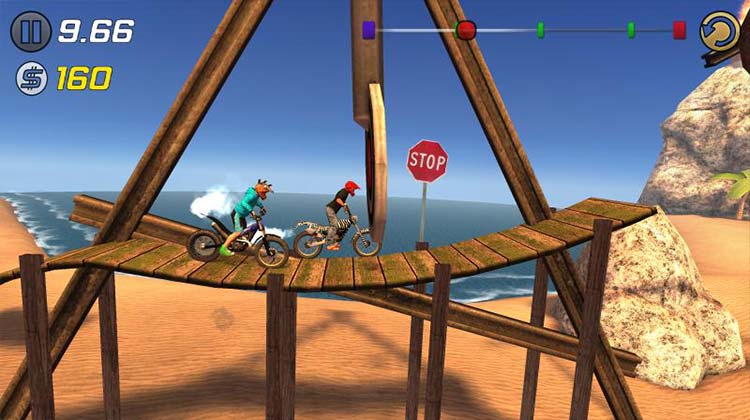 Trial Xtreme 3 - is a continuation of a fascinating motor-simulator from Deemedya studio. In this part not only graphics was seriously improved, but the game became free. Now driving on motorcycles on colorful 3D-environment is possible without having paid and also it’s possible to compete with friends and leaders of tables in new network mode. Hear your motor roar while playing the new, most extreme 3d sport game ever! Spin your new bike rims and speed up in the best mad PvP races. Play, challenge your Facebook friends, make their bones crush and Win to rule the leaderboard!

Leading the games charts in hundreds of countries, Trial Xtreme series is BACK and it’s going to set the bar even higher. Tackle 137 Completely new and original courses, fighting your Facebook friends for the race, win while carefully controlling your bike to ensure that you don’t break your bones n’ teeth on one of the mines, water pipes, or wrecked cars that are standing in your way. This extreme Trials game, will take your breath away with its new innovations and new amazing features.

Race against your friends and the world top Trials bikers head to head, shoulder to shoulder & eye to eye to prove to everyone what we already know- That you are #1! the best, top Trial Xtremist out there! Customize your bike and rider to your own taste, then hit the course and win the race by taking advantage of the brilliant new social media and offline multiplayer options that allows you to challenge friends or random players even when they are offline to spin their wheels faster.