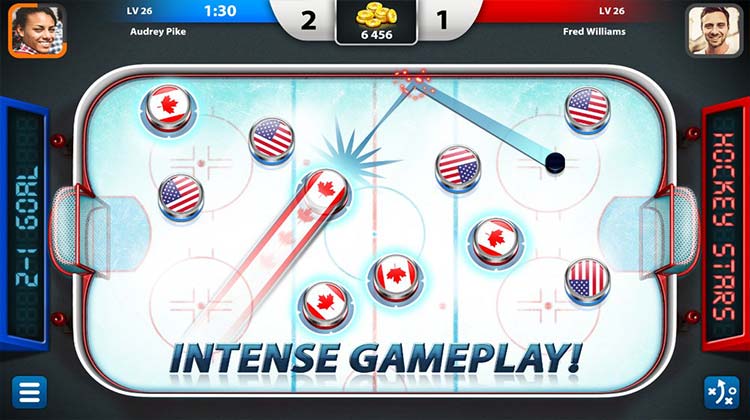 Hockey stars - manage a hockey team where each player is a round piece. Move your finger on the screen to hit the puck. In this game for Android you can choose your favorite hockey team and lead it to victory in different championships. Play matches in different cities and get rewards. Tap the screen to determine the direction of your player’s shot. Remove your finger so the piece moves in the selected direction. Shoots the puck into opponent’s gate, unlock new teams and arenas.

BE THE BEST, BEAT THE REST

It’s YOU vs THE WORLD! Play fast-paced matches and take your team up the global leaderboards to win big prizes!

Only one can rule the rink! Challenge your friends and show them who’s the REAL hockey star!

TONS OF TEAMS TO UNLOCK

Represent your country or choose from a huge selection of teams, each with unique designs and powers. Pick your favourite!

The world’s best multiplayer hockey game on mobile, from the creators of multiple smash-hit online sports games! Take to the ice and become a legend in HOCKEY STARS! Face-off against the world in PvP multiplayer matches: power your shots into the goal, or use close-control and precision aim to hit the back of the net! Play in different arenas for bigger prizes! Win tournaments, and unlock tons of teams with unique powers and styles. Let’s hit the ice and play Hockey Stars!