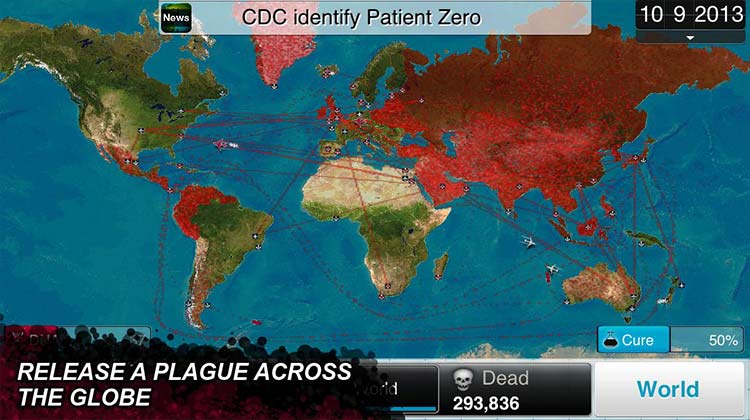 Plague Inc is a tactic strategy, in which you will have to terminate the population of the whole planet with your own hands. For achieving such a global goal you will have viruses, bacteria, parasites, and other terrible weapons of mass destruction at your disposal. Start the destruction of humanity with a single man who becomes a zero patient. After that you are to take care of the illness to develop and be rapidly spread all around the world. The game possesses a completely inimitable game mechanics.

The Plague game doesn’t have much action; nevertheless it looks quite well, though the special stress was laid on its design and sound. A possibility of cultivating your own virus by producing mutations has become the zest of the game. In particular, after the beginning of infection you will have to adjust the properties of the virus, giving it new features, such as resistance to cold, heat and antibiotics and the ability of being transmitted through the air, water and blood, by animals and parasites, as well as affecting various organs. Each mutation will need special points, which you will get for spreading the virus and destructing people

Can you infect the world? Plague Inc is a unique mix of high strategy and terrifyingly realistic simulation. Your pathogen has just infected "Patient Zero". Now you must bring about the end of human history by evolving a deadly, global Plague whilst adapting against everything humanity can do to defend itself. Brilliantly executed with innovative gameplay and built from the ground up for touchscreen, Plague Inc. from developer Ndemic Creations evolves the strategy genre and pushes mobile gaming (and you) to new levels. It’s You vs. the world - only the strongest can survive!