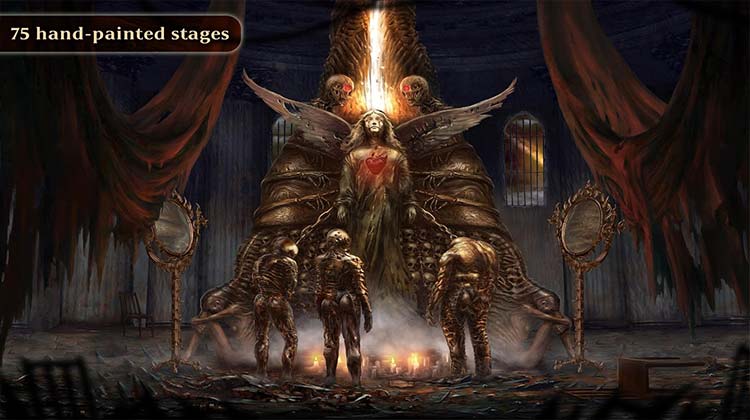 Tormentum: Dark sorrow - help the hero survive in a surrealistic world and escape from the gloomy castle solving puzzles on the way. The protagonist of this game for Android woke up in a cage suspended from the flying airship. The airship delivers the hero to a horrible castle, a prison for the hapless. Explore the castle and other, equally gloomy location. Uncover mysteries of this strange world and help the hero to discover the truth about his past. Talk to unusual heroes, run away from monsters, and solve puzzles.

A nameless hero finds himself in a mystery place between fantasy and nightmare. He doesn’t remember his name nor where he comes from. Wandering through strange lands, he struggles to discover the truth about the world around him, as well as about himself. Can you escape from this dark world with plenty of devilish puzzles? The dreamlike, nightmarish atmosphere of the game was inspired by the works of painters H.R. Giger and Zdzisław Beksiński. The game’s final look and feel was also strongly influenced by the universes of dark fantasy games such as Demon’s Souls or Dark Seed. This unique mixture gave life to a bleak and depressing world.