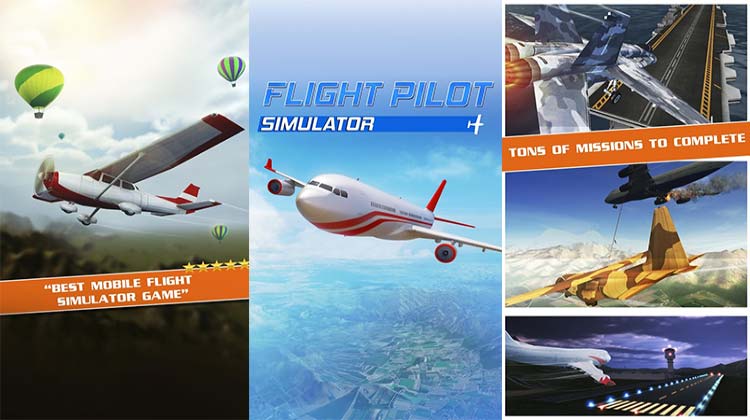 Flight Pilot Simulator 3D - fly different aircraft from light one engine planes to huge passenger airliners and jet fighters. Try out hat it’s like to be a professional pilot in this Android game. Sit behind the wheel of different aircraft and do interesting missions, from simple transportation of goods to rescue operations. Unlock new planes and start new missions. Take off into the sky and land on ground airfields or on decks of aircraft carriers. Explore the vast world in free flight mode.

Get yourself the best plane and go HIGHER!

Not decided yet if you’re UP to the CHALLENGE?

Forget dumb repetitive games. In Flight Pilot Simulator 3D Free, your duty includes racing against time, control a fire in the middle of the mountains, and land safely on a tiny airstrip (or even on an aircraft carrier warship).

Flight Pilot Simulator 3D Free does NOT require any internet connection. You can enjoy it in the subway, or while traveling on a real plane, or in the car on the road, or during services in a temple (or maybe even on toilet!)

Our free game will not consume tons of data from your mobile plan.

We’re working hard (and continuously) so that all Android phones and tablets run the game smoothly.

Flight Pilot Simulator 3D Free does NOT contain violence nor any other mature content. You’re free to play it together with your children of any age. We bet your boys and girls are gonna love it!

The BEST flight simulator game for Android - unleash your inner maverick, become a pilot and CONQUER the skies!