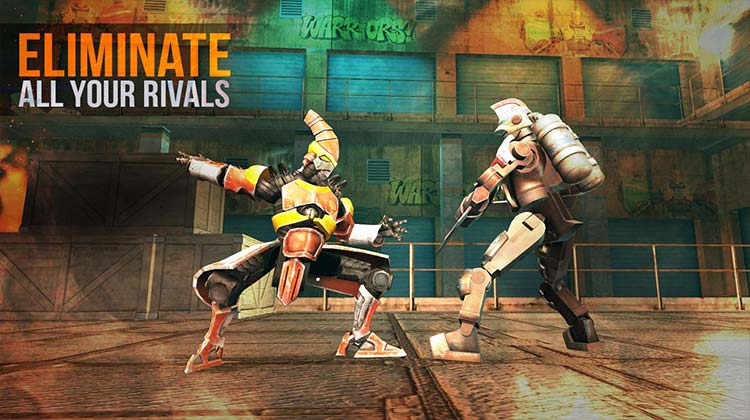 Clash Of Robots for Android

Fight against the best robots only in Clash of Robots! With Clash of Robots, Get ready for the action-packed real time multiplayer combat of the decade! Combine your human intelligence with the strength, resilience and tactics of a robot in this futuristic robotic game. Engage with the enemy, spot their weakness, formulate a strategy and dive into this fight and give your 100% for glittering rewards. Join epic PVP battles against rivals from all over the world!

Enroll into Career Mode to fight one on one in 3 rounds to learn moves. Rule the robotic world to get maximum benefits in the Tournament Mode. Climb to the Leaderboards of Clash of Robots to be the most respected fighter of them all! You can also join a league to play with a single combatant one on one from all over the world! Win Challenges and exhibit your achievements in an all new Trophy Room.

Enjoy the seamless melee combat mechanism and teach your robot some sick moves in this skill based fighting system. Throw your robot rivals off their game with hard hitting attacks and bewildering moves. Unleash your robot rage with deadly jabs, uppercuts & special moves against rivals to win world championship belts, collect trophies & knockout all opponents!

Want to win the fight with the smartest moves? Then unlock the unique knockout attack of your robot and use it for the maximum impact! Each one of the 40 fighters are assigned grappling attacks like Power Punch, Doom Attack and Mega Trample! This perfect balance of fiction and realism and the combat physics is sure to spice up the match to put up an amazing show! Fill up your power bar to unleash special fatal attacks to reign supreme in combat!

Create a war machine to fit your own play style many possible combinations of robots and weapons. Unleash special powers like Aegis Defense and Magna Shield to dodge the attacks of your rivals. Put your best efforts and get ready to for an amazing combat experience. Prevent yourself from an untimely defeat and show your nerves of steel by using the Health Kit in your hour of need.

Choose from over 45 options, a robot that expresses your personality the best! Face your biggest rivals in your best avatar that has life like intricate details and immaculate animations. When the biggest rivals clash, make sure you stand out of the rest! Join the ranks of the Metal Warriors! Unleash the champions, enter the ultimate contest!

Take a step back and watch in awe as we take you to hauntingly realistic locales like Desert Safari, City Square Bridge, Tomb of the Kings, Doctor Dragan’s Labs, Mother Ship, Streets of Moscow, Amazonian Trenches and many more. Reign supreme in huge battlefields that can barely contain these towering combat machines. Prove yourself in each map and use different strategies and tactics to emerge victorious from battle!