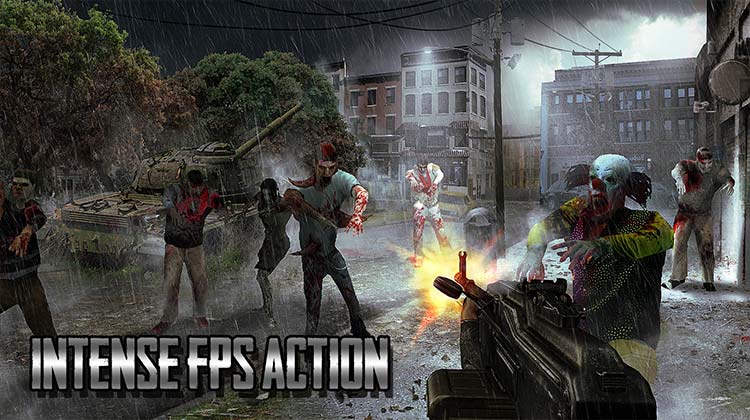 The new real zombie war game with incredible 3D graphics. Your goal is to survive from the undead apocalypse in this first-person living dead shooter. Annihilate the waves of zombies before the infection spreads and the zombie tsunami becomes unstoppable. Adjust the zoom in your rifle, keep your finger on the trigger and make awesome headshots. Can you stop the epidemic and be the real zombie hunter?

FPS action in this zombie shooter game: A game with a combination of weapons, strategy and gore zombie style. Take control of a sniper and clean up the streets of the walking dead’s. Killing zombies and stop the zombie assault, equip the guns and unleash the massacre! Stay alert to the actions of the undead, select your target, aim with precision and shoot. Annihilate hordes of living dead, with simple movements of your finger you will have to destroy your enemies!

Every second counts, and a bullet in the right time will be the difference between a living human and a living dead. Upgrade your shooting arsenal and increase their destructive power with the rewards that you win on each mission. Use your sniper rifle, kill all those waves of zombie and become the ultimate combat killer. Aim faster, shoot better!

The horde of living deads is coming and the zombie assault is almost unstoppable, are you ready to be the ultimate zombie assassin and stop the undead waves? Will you come out alive to save the world and prevent the impending apocalypse? Boost your firepower and rid the world of this plague of zombies. Select your dead target, hit and shoot!

Shoot a hail of bullets with your powerful weapons and rid the world of this plague of zombies. Use the bazooka to destroy large hordes of living dead. Bring death to the dead and survive in this Z-war!

Your wild dogs are hungry and don’t doubt to kill any living dead, so let them go to the Zombie War in a new 3D the undead killer game!