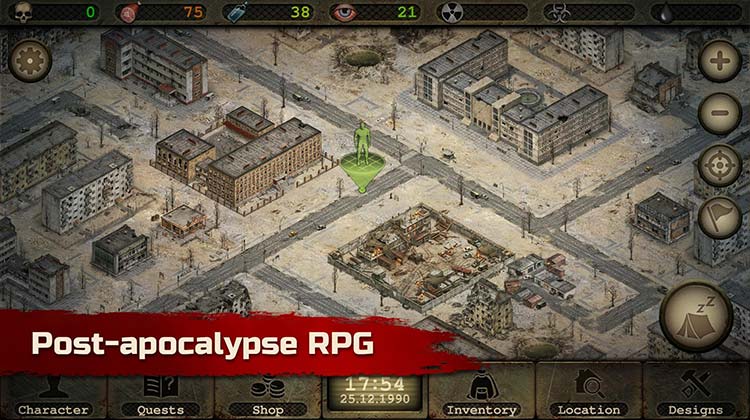 Day R - try to survive on vast lands of USSR after nuclear war. Look for useful objects and resources. Fight bandits and mutants. This Android game will take you to a post-apocalyptic world after a nuclear war of 1985. Guide your hero through the huge country that turned into a radioactive wasteland. Search for weapons, food, medicine, and other useful items. Look out for the well-being of the hero. Unite with your friends, and defeat insidious enemies. Create a variety of items.

How to survive in post-apocalyptic world destroyed by nuclear war and avoid radiation? How to stay alive in rpg games online? Tell after role playing game in Day R survival online!

Radiation, hunger and disease are all around you. You have to cross the entire country and save your family after nuclear war. Who knows if they are even alive, or if radiation and the deadly virus have already reached them? Uncover the secret of the apocalypse and regain your memories during a walking across the huge territory of the USSR in the 1980s.

Surviving after the apocalypse isn’t easy. You’ll have to face the real hunger games and dead characters! Monsters, thirst, countless pandemic diseases and injuries, blood-thirsty enemies – you have to fight it all in survival strategy games. Craft all your resources: weapons, clothes, and transport.

War never changes. In 1985, the USSR collapsed before an unknown enemy. Within days, the entire country became a radioactive wasteland – violence, hunger and disease reign here now. When you no longer lose in the fight to survive, other survivors await you in coop – Online mode in adventure games lets you survive together, dealing with hardship, talking in chat and sending gifts to each other. Try to survive zombie apocalypse!