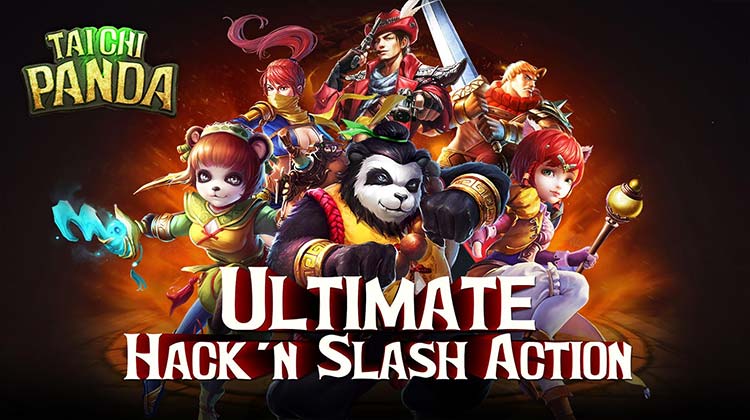 Taichi panda - explore a variety of dungeons, destroy hordes of monsters and fight strong bosses. Collect amazing loot and improve your hero. In this Android game you can create your own character, for example, a brave warrior, a cunning fox mage, tai chi panda, etc. Each character has a unique fighting style and a set of skills. Get combat pets that will accompany the hero and help you in battle. Unite with friends to defeat powerful bosses together. Fight other players on the arena.

Grab your sword and battle hordes of crazy creatures, magical mysteries, and sinister specters on an action-filled journey to become the ultimate legend! Prove you have what it takes in a goofy and thrilling action adventure MMO rendered with PC game quality 3D graphics and full-body motion capture technology.

True power lies within, unleash your hero and fight through to infinity! Battle through unique levels wielding blades, magic, and fists to bash enemies into oblivion with a fun, fast-paced action combat system. Master the unique skills of 6 distinct heroes to defeat enemies and become the ultimate champion of Avzar!

Build up a powerful hero through strength and cunning in an RPG adventure! Collect and upgrade gear, skills, pets and mounts to increase your might and unlock your inner potential. Do you have what it takes to become a Taichi Legend?

Battle Online and Rule the Land

Join in online PvP and co-op with other players! Take on powerful bosses, and become a hero alongside allies in Team Instances. Battle in the arena, join Guilds for online Guild competition and co-op, or enter the fray in 25v25 Battle Royale PvP. Capture territory in Warpath, and rise to the top in team arena PvP League!

As the heroes of Avzar battle within the mortal coil, the highest powers look on in despair. The struggle between the good in the world and the growing darkness is bleak. Cosmic forces must join the fray, as powerful new demigods and talismans make their appearance and veteran’s of ancient battlefields resurge to usher in the prophesied celestial balance in the exciting new Divinity Update. Rise to the challenge and discovery your destiny in Taichi Panda!