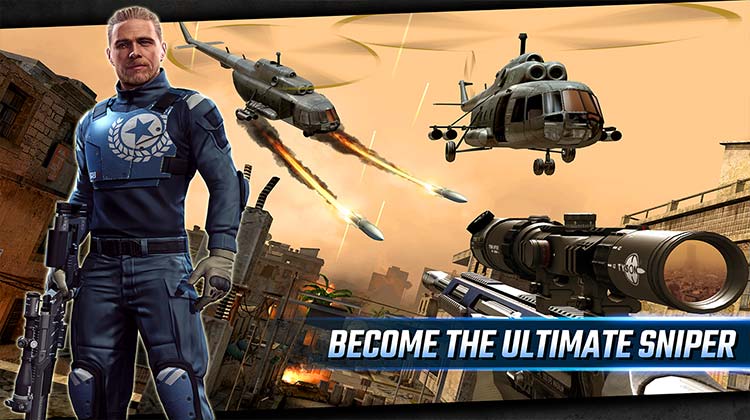 Sniper strike: Special ops - perform secret missions as a memberof an elite commandos squad. Become the best sniper and get a deserved reward. In this Android game the battles against terrorists and other dangerous opponents are waiting for you. Take a good firing position and eliminate enemy fighters from a long distance. Cover your allies. Complete missions on setting hostages free in different parts of the world and even on board ships. Buy various sniper rifles and upgrade them. Win sniper duels against other players.

Intercept, eliminate and extract. It’s time to engage the enemy. Sniper Strike is a high-octane sniper experience that pits you in battle across three gameplay modes and hundreds of missions. Experience a AAA rated sniper game like never before on mobile. Scout through immersive environments, engage in rapid-fire combat and build the ultimate super-soldier as you customise their state of the art gear.

Team up with Wolf, Jackson and the rest of Strike Force as you target hostiles and take down the evil Elite Order. Go head to head with friends in online combat and shoot to the top of the leaderboard.

Whether you’re engaged in live PvP sniper duels, rescuing hostages with breach specialist Wolf, or fighting to be the last man standing in arena mode, this is one epic FPS experience that you don’t want to miss!