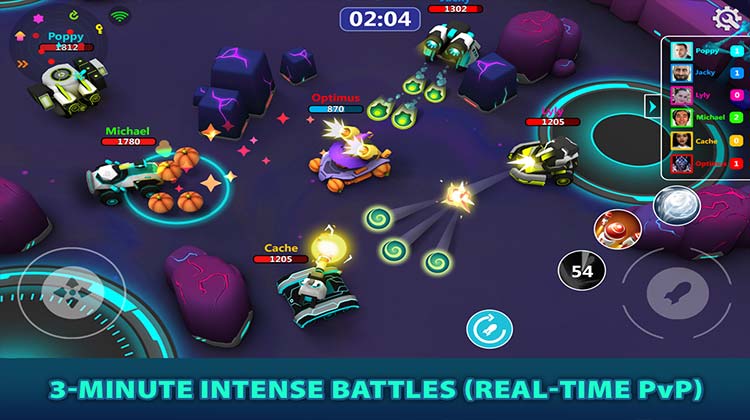 Tank Raid Online - control a futuristic tank and participate in dynamic tank battles on huge galaxy arenas. In this Android game battles last 5 minutes. First 3 minutes you must spend looking for upgrades which will power-up your tank and increase your chance to get victory. Rest of time you are going to try to destroy as many opponent tanks as possible. Use plasma cannons, lasers and other weapons. Apply unique abilities of your tank such as invisibility for instance. Create and upgrade new tanks.

Join up with friends, plan your tactics and get ready for an intense real-time PvP battle! Unlock more than 20 fast-paced tanks of exclusive skills, own the best arsenal of weapons and put your strategy into action in 4 different multiplayer game modes:

Collect cards to upgrade your favorite tanks and skills. Compete for higher ranking in your country and world leaderboards. Play it now and be the star of all galaxy battles!