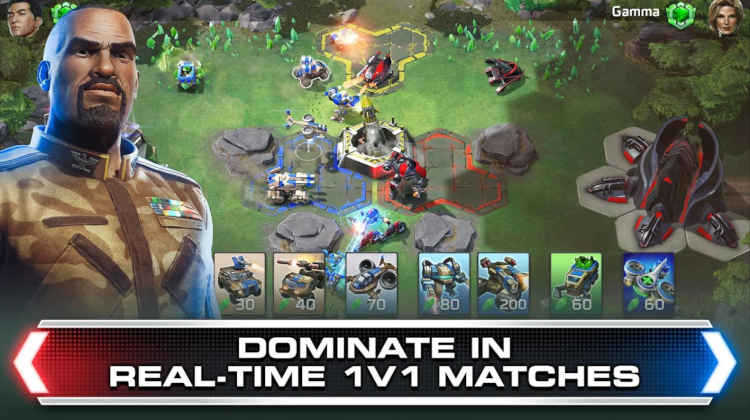 Command and conquer: Rivals - select your side in the conflict, hire outstanding generals, gather a strong army and win great battles. Demonstrate your talent of a strategist on the battle fields of this Android game. Build a military base and defend it from enemy attacks. Build laboratories, barracks, plants and other objects. Gather an army consisting of infantry soldiers, tanks, battle planes and other combat units. Lead your troops by a commander having unique skills and abilities. Try yourself in the battles against players from all over the world.

Lead your army to victory in The War for Tiberium with Command & Conquer™: Rivals, the definitive real-time strategy game on mobile! Battle to dominate your enemy with Commanders from the Global Defense Initiative and Brotherhood of Nod. Customize your army with a unique commander, infantry units, and vehicles. Conquer opponents in one-on-one battles and strategically direct your forces to earn every victory. In this war, control is power.

In Command & Conquer: Rivals, the strategy behind your skills determines victory or defeat. Choose a Commander to lead your forces – each holds powerful abilities that can influence your approach and turn the tide of battle. Create winning combinations of infantry, tanks, aircraft, and high-tech behemoths. Customize your army to align with your Commander’s unique abilities, then unleash formidable weapons and vehicles in all-out war.

Go head-to-head in live battles with other players as you fight for map superiority in real time! Choose to fight for the Global Defense Initiative or Brotherhood of Nod. Restock your supplies and boost your army with valuable supply convoys. Complete daily challenges for massive rewards that improve your Commanders, weapons, and abilities. Grow your army with every victory and climb the leaderboards!