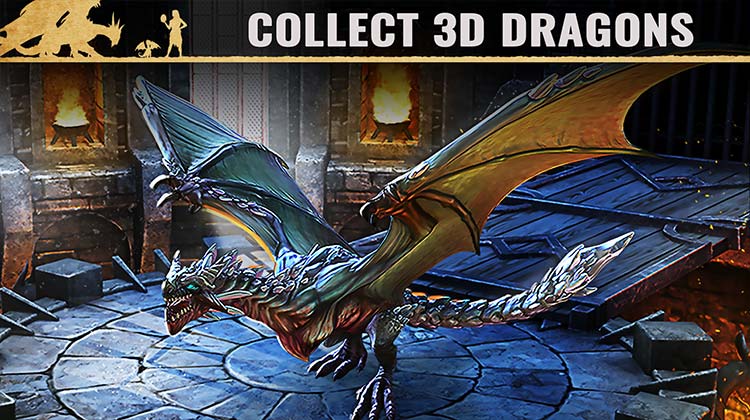 War dragons - is a visually stunning 3D real-time strategy game that puts you in control of the ultimate dragon army. Construct your own castles and defend them from enemy forces. Use unbelievable power of dragons and win the whole world of this Android game. Control the dragon flight, apply firebreathing and powerful magic to destroy targets. Join the guild and fight together with friends. Build impregnable walls, high towers and other constructions withing the castle. Place archers, catapults and other fighting units on the walls to reflect enemy attacks.

War Dragons has more than one hundred unique dragons possessing different attack styles, spell abilities, and classes. Breed your dragons to create an even more powerful army. See if you can unlock the furious behemoth Khrysos and dominate the battlefield!

Start or join a guild to combine forces with other dragon lords. With true synchronous multiplayer, you can chat with teammates in real time and coordinate attack and defense strategies against other guilds.

Strategize and build your island fortress with the optimal combination of lightning, ballista, and archer towers to best protect your base against enemy attack.

ASCEND TO THE THRONE

Participate in a wide variety of weekly events with the chance to win rewards, such as rare dragon eggs and treasure hunts, for you and your guild. Claw your way up the leaderboards to assert yourself as one of the world’s top dragon lords.

Claim surrounding territory by forging alliances with other Dragon Lords, riding your dragons into battle, and obliterating the enemy. Should you and your teammates succeed in conquering the world, prepare to reap the spoils of war and bask in eternal glory.

The game was built on the Mantis Engine, a proprietary 3D game engine, featuring state-of-the-art graphics and cinematics. Experience mobile games like never before with the ability to visually explore all facets of its stunning world.