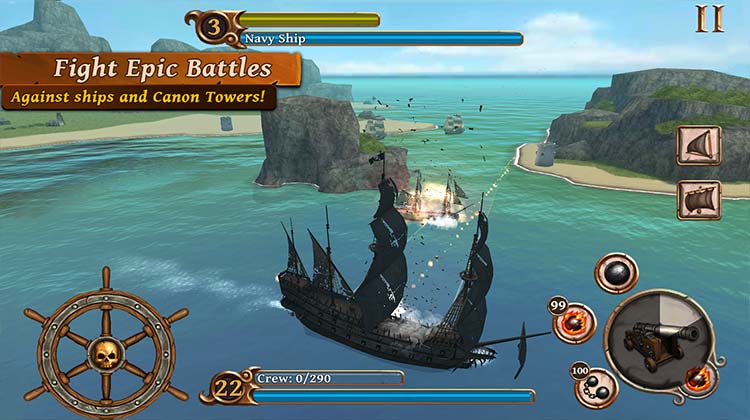 Ships of Battle: Age of Pirates for Android

Ships of Battle: Age of Pirates - take command over a pirate ship and cross dangerous waters of the Caribbean sea. Take part in the sea battles against other pirates. Become a famous pirate in this Android game. Transfer to the 18th century, in the time of flourishing of sailing fleet. Step on the captain’s bridge and lead your ship to the new lands. Reveal the secrets of the deserted islands and find treasures. Fight against numerous enemies and sink enemy ships. Improve your island, build various constructions, buy and upgrade new ships.

Welcome Pirate! Are you also intrigued by the Golden Age of Piracy in the Caribbean? The best Pirate game on mobile and your Pirate Battleship are waiting for you!

Navigate the Caribbean seas, set sail in your own Pirate battleship and travel to places like Cuba, Florida or even Nassau! As a former member of the Blackbeard navy, you are now a Pirate Warship Captain. This means that you need to create an entire Pirate Empire, traveling routes and ultimately, defeat Blackbeard himself!

To do this you are tasked with many minor and major quest to fulfill this goal! You may be asked to defeat a certain historical figure in the open seas of the Caribbean, help a governor of one of the major settlements and make peace or even war! The Caribbean sea is full of different warships and battleships, so you’ll have to be careful!